My Take On The Union Jack Craze

Can you take another Union Jack project?  I know I am late to jump on the band wagon, but my excuse is that I've just gotten back into refinishing furniture and to justify the Union Jack, my husband is English and I did live there for three years so I think it's okay.

I found this trunk in the garbage and managed to cram it into the back seat of my car to haul it home.  My husband is great, but he is fed up with me sending him out in his van to pick up garbage which I have "discovered". 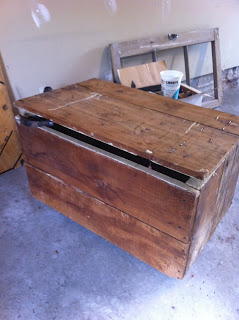 We pulled out so many nails and tacks I thought we would never be finished, but finally it was no longer a dangerous weapon, instead just an ugly old wooden box.  I sanded it all over, stained the sides with Colonial Oak coloured stain and then did a lot of research to make sure I had the Union Jack right.  I measured out the size of the top onto newspaper and drew out my Union Jack.  It took a few times to get it right, but doing it on paper made it so much easier later. 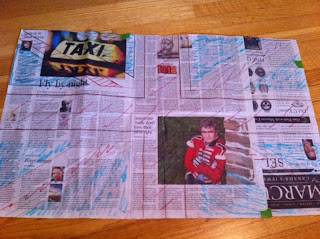 I painted the entire top white with homemade chalk paint and when dry I placed my pattern on top and I traced it out.  The newspaper print came off just enough so it left a mark to show me where I had to put my tape (I use Frog tape because although it costs quite a bit more, it doesn't bleed).  I mixed some red and blue homemade chalk paint using the little bottles of acrylic craft paint from the dollar store and then painted away.  When it was dry I distressed it a bit and then covered it with two coats of polyacrylic on the sides and three on the top.  I added some Special Walnut colour stain and urethane all in one to the top and rubbed it off to age it.  We also removed the small, old wheels which I thought might damage our soft pine floors and replaced them with locking rubber ones from Home Depot.  I'm so pleased with the result, now we have a great coffee table with storage for my husbands record collection. 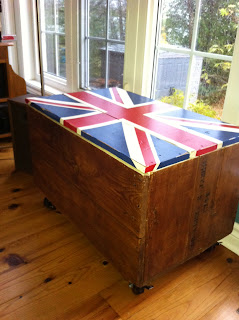 looks awesome! i love it paired with the rustic wood!

A wonderfully transformed find! Great job. Thanks for sharing at the All Star Block Party!

By the way, I featured your trunk this week.

Thank you so much for your kind words and for featuring me! That was my first post and my first feature so I'm beyond excited :-) Now I just need to figure out how you ladies keep pumping out new projects and attract followers. Love your blog!

Great redo, and I love your take. So glad you joined me. Could you please add my link or button along with the others. Thanks.

Cute!! my sister is going to LOVE that! she just painted the Union Jack on the back of a curio cabinet that she took the doors off of... ;) just bouncing blogs this morning and found this crafty blog hop... love crafty!! ;)

That is fantastic :-) Just stopping by to say hi from Thrifty Decor Chick......welcome to the world of blogging :-)

Looks GREAT! Love Union Jacks, although I haven't done one myself (yet!).

Wow! It looks great! You did a great job! ;-) Thanks for stopping by my blog. I will follow you as well.

You don't need to justify the trend. If you have a connection with it and you love it, then that's all that matters!

It has such rustic elegance. Well done!

This is fabulous! I love it!! Thanks so much for sharing & for linking up to the Dog Days of Winter "Thrift It" party!!

Wait a minute...this is GREAT! Really! I really, really like this! I know the Union Jack is something of a "fad" in some people's minds, but you guys actually have the authentic reason for the rhyme living there!!! It is a part of your husband's heritage, and this is a great way to incorporate that into your everyday living!

This would have been a HUGE hit back in the 60s with the British invasion here in America! You could have made and sold these by the billion!!!

I admire your tenacity and patience in sketching it out, using the right tape, and doing it right. It sure paid off! Lovely piece! I hope you and your husband are able to enjoy it and its usefulness for years to come! (Visiting from Jessica's "A New Creation" link party)

You are amazing!! Not only do you hand draw and paint these lovely creations, but you make your own paint too? Wow! Thanks for sharing!

Would love for you to share this at my link party where we pin all those who join to our party board
http://myfashionforwardblog.com/2013/5/23/all-things-pretty-9 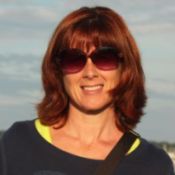 I'm a 40-something mother of two with a full-time career. I started this blog after being inspired by all the terrific blogs and great projects. I hope you will follow me to see what super ideas I can come up with.

Get Free Posts By Email